I’ve been working on paying attention to my feelings and not dismissing them. It’s one thing to be sensitive, yet it takes some courage to really feel what’s going on, in an investigative sort of way, rather than just label and dismiss strong emotions.

While on this emotional journey I realized that I was ignoring how was feeling physically, as well: MY KNEES HURT. Rather than push through these feelings, I needed to honor these feelings and take some of my own advice.

In one of my previous posts, “Rock It!” I discussed the fact that sometimes we have to readjust our goals, yet they can be fulfilling, nonetheless. I reached my goal of becoming a runner (by my standards) and I was not even entertaining the thought of stopping.

I’ve been running for a few months now, consistently, 2 miles, every other day. I even ran in California during my vacation. I am particularly proud of a run I took a few weeks ago with my daughter and her boyfriend, since I was able to keep up with them! It also felt good to be able to bond with them through this activity. 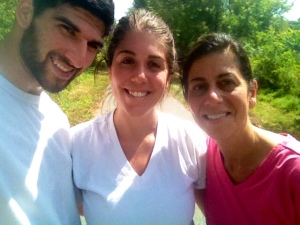 I worked so hard to be able to run for an extended time that I was determined not to lose my momentum. I feared that if I took too much time off in between runs, that I would have to start all over again. So when my knees started to hurt  I pushed through the pain and continued my regime.

After a few weeks of constant pain, I grew concerned. I didn’t want to cause irreversible damage or do anything to my knees that would require surgery.

By identifying what I was feeling and honoring that feeling, I created a space for another activity.

I ran less, so I had more time to get into yoga, something I always wanted to do. Once again, my original goal (running) was redefined (fitness) and the end result was just as satisfying, perhaps even more.

5 thoughts on “Honoring Myself”